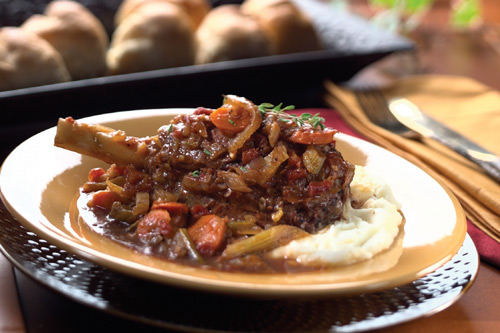 What better way to spend an evening in then with a plate of these rich, braised lamb shanks?

3 carrots, peeled and sliced on the diagonal 1/4-inch thick

1Preheat the oven to 375°F. Generously season the shanks with salt and pepper. In a large skillet, heat the oil over high heat. Brown the shanks on all sides until golden brown, about 15 minutes. Remove the shanks from the pan and place them in a 13x9-inch baking dish. Discard the liquid from the pan.

2In the same skillet, combine the garlic, carrots, onion and fennel and sauté for 6 to 8 minutes on medium heat until vegetables are lightly brown, stirring occasionally. Mix in the beer or broth, tomatoes and juice, chicken broth, thyme, and bay leaves. Bring the mixture to a boil and then pour it over the shanks.

3Place the baking dish in the oven and braise for 2 1/2 hours. Baste the shanks with the sauce and turn them over every 45 minutes while braising. Remove from the oven and discard the thyme sprigs and bay leaves.

4Serve the lamb shanks in large, low-sided soup bowls with the sauce.

Recipe and image provided by the American Lamb Board